According to the census return, in 1871 William Vickers (b.1825 in Brimington) was the Butler at Kildwick Hall, and his wife Sarah was the Housekeeper. Although the family had moved on by the time of the next census, perhaps to Eshton Hall (?), members of the Vickers family must have stayed in touch with the Brigg family at Kildwick Hall for several generations.

On 28th December 1914 John Jeremy Brigg, the son of Sir John Brigg, sent this message to Charles Vickers the grandson of William Vickers. 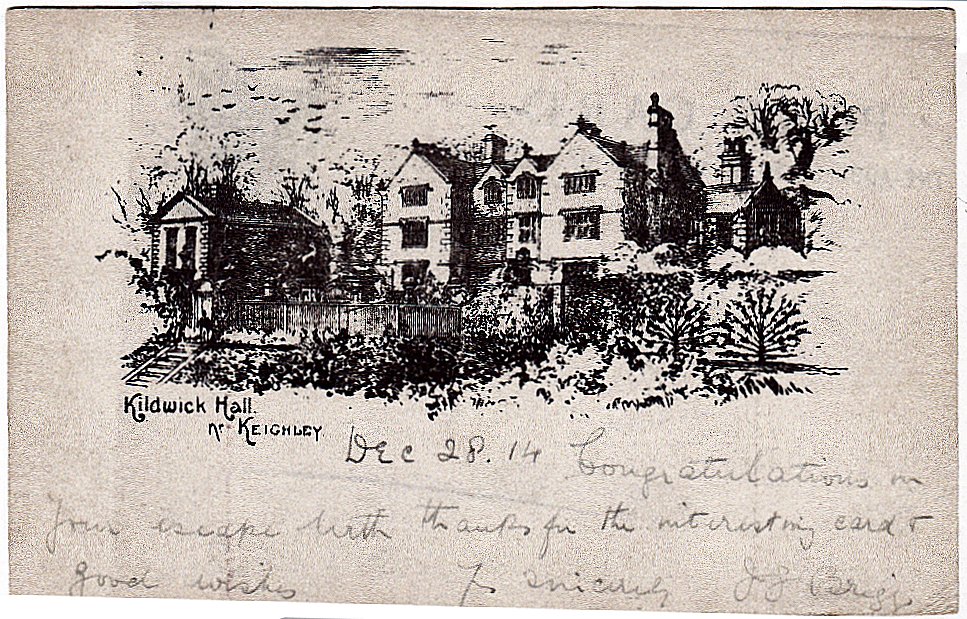 Congratulations on your escape with thanks for the interesting card & good wishes
Yrs sincerely J.J.Brigg

The word “escape” was intriguing and an exchange of emails with Doug Aylward, the grandson of the recipient, revealed a connection with a Yorkshire WW1 tragedy.

In 1914 the Vickers family were living in Hartlepool when, on December 16th, the town – along with Scarborough and Whitby – was bombarded by a squadron of ships from the German Navy. The bombardment caused significant damage to the town and resulted in 130 civilian deaths with hundreds more injured. (See When Germany bombarded Hartlepool for more details.)

It seems that Charles Vickers did indeed have a lucky “escape”.

A Family at War – the Whitaker family in WW1

We may request cookies to be set on your device. We use cookies to let us know when you visit our websites, how you interact with us, to enrich your user experience, and to customize your relationship with our website.

Click on the different category headings to find out more. You can also change some of your preferences. Note that blocking some types of cookies may impact your experience on our websites and the services we are able to offer.

These cookies are strictly necessary to provide you with services available through our website and to use some of its features.

Because these cookies are strictly necessary to deliver the website, refuseing them will have impact how our site functions. You always can block or delete cookies by changing your browser settings and force blocking all cookies on this website. But this will always prompt you to accept/refuse cookies when revisiting our site.

We fully respect if you want to refuse cookies but to avoid asking you again and again kindly allow us to store a cookie for that. You are free to opt out any time or opt in for other cookies to get a better experience. If you refuse cookies we will remove all set cookies in our domain.

We provide you with a list of stored cookies on your computer in our domain so you can check what we stored. Due to security reasons we are not able to show or modify cookies from other domains. You can check these in your browser security settings.

We also use different external services like Google Webfonts, Google Maps, and external Video providers. Since these providers may collect personal data like your IP address we allow you to block them here. Please be aware that this might heavily reduce the functionality and appearance of our site. Changes will take effect once you reload the page.